Following our historical trip to Dubris, sorry, Dover, we spent our final full day in London exploring the heaving, bustling cosmopolis of the old city.

A friend of our host told us that the most scenic way to reach Brick Lane, where we planned to fossick among the stalls, was via the Columbia flower market. Which sounded perfect, though he did tell is to listen out for the Cockney accents for some extra local colour. As it turned out, we needn’t have listened out for the accents, as from the moment we started down Columbia lane we were engulfed in the sights, smells and above all sounds of the market. Stall owners were calling out to each other over the crowds in exactly the sort of Cockney accents that the streets are full of in Dickensian dramas. Under that was the chatter of locals and tourists, admiring the overflowing buckets and trays of flowers of all kinds, the rattle of bicycles and tooting of cars on the next street.
We briefly escaped the commotion in a little cafe behind the stalls, enjoying pies (actual pies!) and the relative peace of the room, before returning to the world outside.
Though there were many beautiful bouquets, it didn’t seem like a good idea to get flowers the day before an International flight, so we continued along the canals to Brick Lane.

Brick Lane seems from the end that we started on to be a series of jumble sale stalls, with collections of old books and shoes that anyone could dig out of their spare rooms. As we went on though, we saw the little specialty shops, boutique second hand stores and underground markets. They were the sorts of places where you could buy expensive candles and designer jewelry, vintage fur coats, bomber jackets and a green velvet cloak. Record stores, selling actual records, were doing a booming trade and mostly young people were striding around in groups, retro sunglasses on against the sun shining down the lane. Passing a placard with a mention of Jack the Ripper, and walls covered in the most artistic of graffiti, we found the food vans and regretting having already eaten. 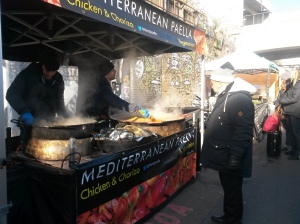 After some difficulties in Whitechapel Station (it would be that one), we made our way to the centre of town and the National Gallery. We had only a limited amount of time to spend, so tried to find the eras we were most interested in. Very soon we had found the collection of Van Gogh paintings, including the famous sunflowers and nearby a huge painting from Monet. It was part of a series, but even alone was mesmerising. Pulling myself away I continued my search for a particular painting and soon found it, smaller than I’d thought. I don’t know what it is about The Fighting Temeraire, but something pulls me back to it over and over.
What’s it like seeing your favourite painting in person? Satisfying and a tiny bit disappointing, for the wait to be over.

There were other Turner paintings as well, which were also entrancing in their own way, not to mention an astounding horse from Constable and endless halls full of art.
Running out of time, we then had to leave, though by the time we got outside the sun had disappeared behind the clouds.

Now what was it we were in such a rush about? Well, when one is in London, one must go to the West End, don’t you know?

The show that we’d bought last minute tickets for was a production partly created by a fellow from our own home town, Tim Minchin. It was also based on a book that I had loved as a little girl. It was of course Matilda.
Due to having last minute tickets, we ended up right at the back, though we still had a great view of the stage and the audience. I was a little bit unsure of how it would go for my partner, as he’s well known to be averse to musicals, but we were both pleasantly surprised and in his own words, he got quite into it. 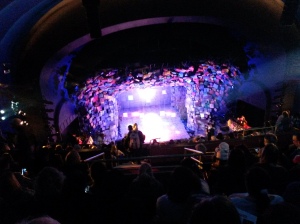 View from the back

It was a show that was full of wonderful songs, sadness, great performances, spiritedness and a message to take away. It often seems that everything these days has some sort of moral, repeated in children’s theatre and movies so that even the least in touch can’t avoid it. The message this time, however, was not quite so Disneyfied. In short, sometimes life is terrible, but putting on a brave face isn’t good enough. If you just grin and bear it, to quote Minchin, you might as well be saying you think that it’s alright. If you want change you have to do it yourself. And friendship and intelligence are powerful. How’s that for inspiring the young?

We left the show, at least in my case, a tiny bit damp around the eyes, buoyed up by the music, songs and fantasy of theatre. Thus lightened, we decided to explore the city at night, taking in Waterstones (biggest bookstore in Europe, seriously, it was massive. And yes, of course I bought a book), Buckingham Palace (less impressive than I’d imagined), the WWII Bomber Memorial (very Greek), dinner at an Indian restaurant (we were in London after all) and finally the couple of drinks (mulled wine with rum!) at a cozy pub. After which we grabbed a ride on a double decker, seated right up the front on the top, for a final tour of the streets of London.