I have finally reached the last day of our trip to Istanbul, about a month after I started, and for the first time in a while it’s a short one!

Our final day in Istanbul was the shortest day as our flight was to leave mid-afternoon, so any plans to visit the Rumeli Fortress or see the non-European side of Istanbul had to be shelved. What we ended up doing was something that hadn’t been on the itinerary. We would find the city walls.

When we had first arrived in Istanbul, we glimpsed many remnants of the old city among the flash and colour of the new city, and what stood out most were massive stone walls that stood on either side of the tram lines. I’d read about ancient walls when researching the trip, but the locations seemed unclear, which is possibly because they are huge and as we were to find out, have been all but absorbed by the city. 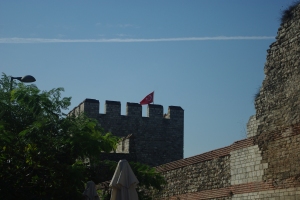 So following a final delicious Mediterranean breakfast at our hotel we headed out to catch the tram we’d arrived on, and hopefully spot the walls in time to get off. We didn’t quite manage that, but after a bit more travelling we made it to the walls. Up close they still looked massive, though we don’t know enough about the specifics of wall architecture to be able to say whether they were Roman, Byzantine or Ottoman, though I suspect they are probably a combination of all three. Strangely, though, as we walked along the walls there didn’t seem to be any gates charging money to enter, or people with maps or anything that would indicate that they are an historical site. We did find a gate but all it seemed to be protecting were plastic chair and tables. Further along we found a pile of stones low enough to climb up on the wall and my partner had a go, perching on the narrow stone ledge. As he sat there, a local holding a plastic bag with a mysterious yellow substance joined him, chattering away happily and breathing in the contents of the bag. After a little while my partner climbed down, under his new friend’s friendly gaze, who waved us goodbye as we continued along the wall. As we walked along we spotted someone between the crenellations on one of the towers, though how he got up there I couldn’t work out. 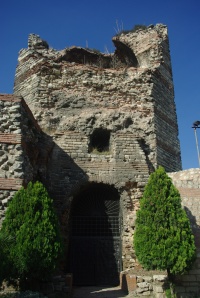 Crossing back to the city side we found ourselves in a somewhat dodgy area, the first indication being a dead cat in a garden. We headed back towards the tram stop we’d arrived at, walking along a street lined with the crumbling wall on one side and crumbling houses on the other, mixed with workshops and small storehouses. The only people we saw were a group of old men trading bullets and two other tourists, who also seemed to be in a bit of a hurry. At intervals the wall was crumbled or low enough for people to climb up, so along the battlements we saw men with suitcases looking lost, others chatting companionably and still more looking down at the city below. It seemed as though the walls were something like a public park, where people wandered about during the day and where somewhat dubious activities possibly occur at night. Despite this, the arches were still graceful and the size and grandeur of the walls were still impressive, and made it possible to imagine the confidence they must have inspired in those who lived on the city side years ago. We read later that the old Roman walls were placed quite a distance from where the city was at the time, and people scoffed when the Emperor said the city would reach them in time. I don’t know if they were the walls we saw but I think it’d be impossible to set limits on a place like Istanbul. 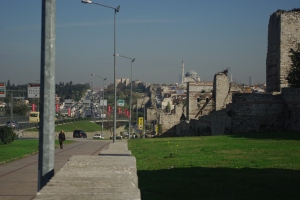 After a rest and drink in the shade of the walls, we headed to the airport, and the end of our visit to Istanbul. 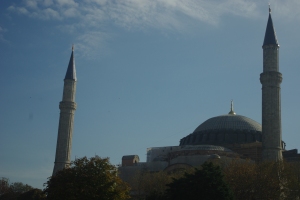 Having had about a month to think about the trip, what I remember most strongly was how my senses were so vividly enlivened, every day. In regards to colour, taste and sound, Istanbul envelops you, and then keeps drenching you in yet more richness. I loved the sweet dried figs and apple tea, the bright sun on ancient buildings, the haunting call to prayer and the endless busyness of the people who live and work there. I was also confronted by the insistent salesmen, lack of women working almost anywhere, the sudden, empty, threatening streets and the smog, which was quite a contrast after Sweden. There was also a multitude of cats, who got everywhere and I suspect actually run the city behind the scenes.
I’ve always liked to imagine cities as living things with characters, that are awakened by millions of lives and never ending activity, though there are only a few places I’ve been where I’ve felt that. Istanbul is one of them, and perhaps has the most character of any I’ve been in so far. I would very much like to meet her again.