I get the impression that my antipodean friends and family believe that a Swedish winter consists entirely of cold, darkness, dreariness and staring mournfully out of the window in between chugging down beer and eating potatoes to drive away the misery. I want to make it clear, here and now, that this is not entirely true.
Yes, the vitamin D deficiency gets us down sometimes and comfort food is tempting (oh wedges and mash, what would I do without you?), but those of us who choose to live up here find ways to cope and sometimes even drive away the darkness.

Way back in November, all of four months ago now, we were invited to a concert across town in Majorna. We were unclear as to what sort of music there would be, but trusted the inviter’s taste enough to assume it would be interesting. After passing rooms full of billiards, young men smoking on the street and closed nail-art shops we found an obscure door and were within seconds enveloped in warmth and the smell of incense. The concert had already started, so after hanging up our thick layers of jackets, beanies, scarves and mittens we shuffled and apologised our way to the corner where our friends had already taken up position. 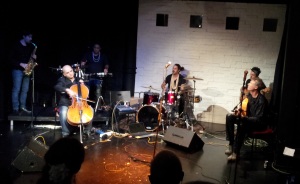 On the stage was a band of six men, a guitarist, two drummers, a cellist, a saxophonist and a bassist who treated us to cross-cultural melodies that I couldn’t begin to guess at the origin of. They seemed to twine from the east to west, and probably north and south too, and had all of the feet in the house tapping along. A lady from India then joined them, singing traditional songs in a style I’d never heard before being joined by an Iranian woman whose presence took up the whole venue. She was amazing, and managed to provoke the room into breaking into a veritable orgy of dancing. Fellow audience members who had seemed typically reserved and quiet were bursting all over the stage, a long line and then circle of dancers twisting around along with the music. Or in the case of some people, along with the music in their heads which seemed to have a different tune. Being Australian, and therefore reserved in a different way, we sat and watched and sipped our wine, as I at least tried to ignore the itch in my feet. 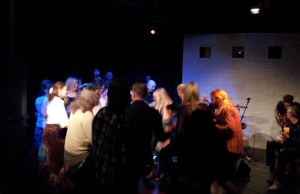 Once started the dancing can’t stop

We followed the concert with a few drinks at a local pub, claiming paintings of vintage aircraft, dancing, guessing the names of songs and staying until closing time.

When the year had turned and we’d returned and mostly recovered from the excitement of Jul and visitors, another celebration arrived. This time is was a housewarming at the home of a good friend of mine. We turned up late, due to getting a little bit lost, and arrived to find an apartment full of Swedes, warmth and talking. We bobbed around between rooms, chatting and listening, and finally found a space in the living room to enjoy our dinner. I had seen on the invitation that guests were invited to bring their instruments, as the girlfriend of my friend is very heavily involved in music, and it seemed as though most of the others who had come to the party were as well.
As the night drew on we became the slightly stunned but gleeful audience of a sudden orchestra of violinists. A guitar and banjo joined in at various times, plus little people dancing among the legs and chairs, but for the most part violins were coaxed into life, belting out folk music and dances. They all seemed to be speaking a language I couldn’t understand, switching between styles and songs with cues I couldn’t hear or see. At the high point, there were 7 violins playing at one time, and I’d guess about 9 in total passed in and out of the apartment. Though I can play music to an extent, these people had the ability to play in the other sense of the word, in the same way that I sometimes like to do with words – throwing them around to make patterns and for sheer enjoyment.
We left late, or early, with the music following us down the street.

Keeping away the cold

So my advice, if you want to take it, is if you are feeling cold and miserable on a winter’s night, follow an invitation for a night of talking and music. Even if you don’t bring your own violin, you can sit amid the music and forget the cold.

The last two weeks or so have been busy, with a side of gangbusters. It started off innocently enough, recovering from a cold and preparing to return to work, plus a bit of socialising and a party that included at least 10 violinists (more on that in another post). It culminated in a house warming party, the sort of party we’ve wanted to hold since we moved to Sweden. 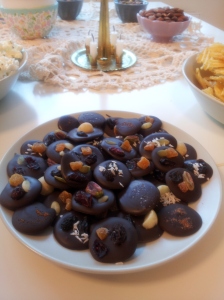 There were wonderful friends, the kitchen was too warm because of all the bodies, candles, baking bread and talking, drinks flowed non-stop, snacks were snacked upon and for once I actually got to talk to most of the guests. Much later, after the last guests had left, we kept the music going and danced and chatted for a few hours longer, drawing out the party buzz and fuzz of wine.

Rather than tidy and then ease back into a normal week with leftovers and finishing off opened wine bottles, two days after the party I was off to Copenhagen to meet someone I hadn’t seen for many months. I took a train via Malmö, crossing the sea and wondering what lay under the grey waves, and how often ships must have careened back and forth many years ago, carrying warriors and loot. I eventually arrived at the central station and stumbled around, seat-sore and tired. I spotted my mum and hugs followed, and we headed out into the city, switching between Swedish, English and Norwegian and chatting non-stop. After dropping my bags off at the hotel, we hit the town. 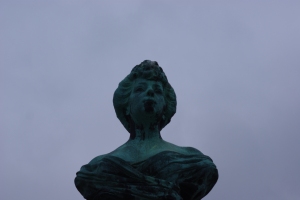 A queen on a cloudy day

I have visited Copenhagen before, a weekend trip and a taste more than anything else. This time we wandered randomly, up the main streets and past landmarks. We saw the Amalienborg palace, the Mermaid, gardens, Nyhavn, children dressed as knights and peasants, shops and streets filled with locals and tourists. 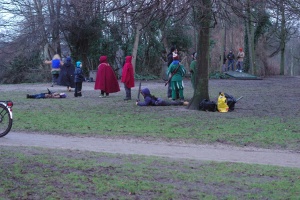 We ended up at a glass-walled market, filled with fish, meat, vegetable, chocolate and tea stalls, smells mingling around us (though fortunately not that of the surströmning). We settled on a shared pizza and wine, and toasted to a week on Copenhagen, before making our slow and chatty way back to the hotel.

The next day, the first full day, my mum went off for a tour of a castle that I wasn’t able to attend, and so I had the day and the city to myself. I started by sorting out some business, and then walking around at my own pace. I passed a memorial to the Charlie Hebdo staff at the French Consulate, palaces, theatres and Tivoli, and ended up at the National Museum. 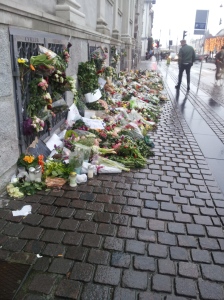 Last time there had been some confusion about museums and I had missed seeing it, which was a shame as it is very good. Plus, it was free.

There were exhibits about the history of Denmark, from the neolithic to the modern era, cultures from around the world and a lot of school children. As I tried to stay one room ahead of the mob, I saw the skeleton of an auroch, and understood why they were considered to be so dangerous and featured so often on ancient paintings. They were so unearthly large and impressive, that it seemed almost a surprise that the last ones only disappeared in 1627. 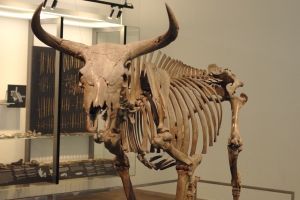 Further on were rooms and rooms of artifacts from early hunters, then farmers and traders, giant horns, helmets, swords and coffins. There were even plaits of hair, left in bogs for 2000 years, almost all a uniform auburn. There was a text describing how the sacrifice of hair was at the same time easy and difficult, as it is so commonly found but takes so long to grow. It made me wonder about what happened that caused those people to cut their hair and throw it away into a muddy bog, thinking it would never be seen again. 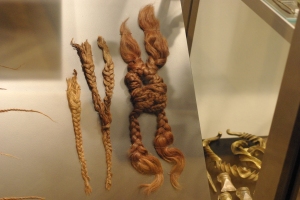 There were cauldrons made by the Etruscans, Roman coins and glasses and a long ship. One of the most wonderful things was the Gundestrup cauldron. 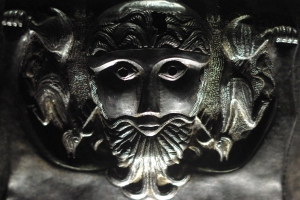 A face on the cauldron

Aside from it’s size and the brightness of the silver, the artistry on it was amazing, and there were many figures I recognised, especially one antlered fellow with crossed legs holding a snake and a torque.

There were also a few rooms with Roman, Greek and Etruscan artifacts, including the painted faces of Alexandrian mummies, a flying penis statue and interesting comparisons between Greek myths and Disney. 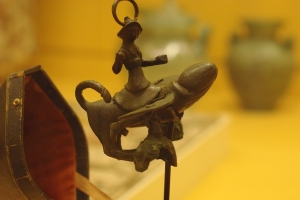 I then wandered through the renaissance exhibition, past ancient microscopes and carved ivory sculptures, ball rooms and a series of exhibits about cultures around the world. Eventually I found myself in the main hall again, and left for the next part of the day’s adventure; the Ny Carlsberg Glyptotek. 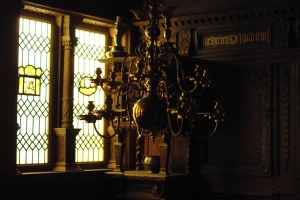 I didn’t really know what to expect when I went to the Glyptotek, which was probably just as well. After depositing my bag and jacket in a locker in the basement, which resembled a cheerful crypt, I followed a set of stairs into a room full of Impressionist sculptures of horses, people and unknown figures. Scattered among them were people sketching, drawing impressions from the art that I couldn’t see. 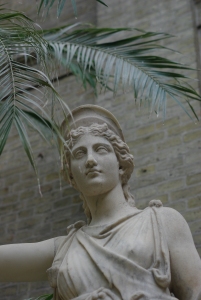 A goddess in the garden

I then went into the main hall, in which a garden of palms, fountains, jungle flowers and statues sit under a huge glass dome. There was no other place like it in Copenhagen, or anywhere else I have seen. From there I found the ancient Roman galleries, full of unknown faces in marble, painted jars and countless other artifacts. 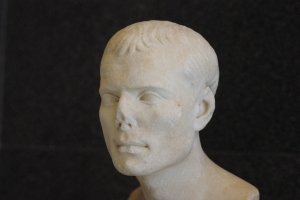 I also found a theatre that had been designed as a Greek temple, with columns statues of gods and ancient celebrities sheltering a colonnade. Yet again, I had never seen anything like it. 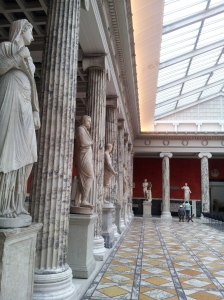 On other floors I found more modern styled art, paintings by Picasso, Van Gogh and Gaugin and enumerable others that I’d never heard of.

Sadly by this point I was approaching the artistic overload point, and so headed out into the snow and slush .

That evening I met up with my mum, who was full of stories about the castle tour, and after a wander and dinner, we slept. The next few days would be not quite as full of history, but instead ideas about the future, and we would need all of the  energy we could gather just to keep up.