This update was started as I sat on a rock overlooking the sea in Saltholmen, alternately scribbling in my writing pad and staring around at the perfectly serene surroundings. I didn’t lug my laptop to the coast and up that hill, and so I’m now typing it up at home, while a rainy mist persists outside.

Göteborg is a city that is tied to the sea. Since it’s founding it has lived by the ships that still meander up the Göte älv to disgorge their contents on the docks that, unlike other harbour cities I’ve seen haven’t yet been reclaimed as fashionable apartments. The Gulf Stream which passes nearby keeps it relatively warm, so far warm enough for a sheltered Australian who can only imagine snowy winters as Yule cards. (As I retype these notes, Fantasia on a Theme by Thomas Tallis, the most oceanic music I know, has started playing, and as well as seeing the still surface of the bays at Saltholmen, I can see the dark beneath the waves.) I’ve always been drawn to bodies of water, whether rivers, lakes or the ocean, fancifully I imagine it could be because about 80% of me is water, but to be honest I don’t know for sure. 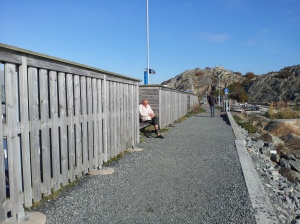 It is a surprise, then, that it’s taken me 6 weeks to visit the coast, and now that I am perched on a rock overlooking Saltholmen harbour, the sun on my back and the breeze in my hair, I am glad. There couldn’t be a better day to be here. 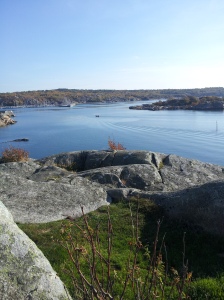 My plan initially had been to take a tram to the end of it’s route, in order to see more than the central city that I’ve been wandering around so far. I chose the 11, which ends at Saltholmen, an island relatively recently connected to the mainland. According to Wikipedia, this town is very popular in summer, when locals flock to swim in the protected bays. This would explain why, in October, the kiosks and icecream stalls are closed. Nevertheless, I wandered along the jetty, admiring the scrubby rocks, and found a cove. A rickety bridge spanned between worn rocks and I climbed over, seeing a rock with a 2 metre sharp drop into a warm pool below, whether drifted jellyfish, seaweed and small fish. There I sat, dangling my legs. I wrote a bit, inspired by the quiet and beauty, then sat and watched. Soon I climbed further and found a perch on the highest rock, with a view over the sheltered harbour and bays. There are others basking up here, a few couples wrapped in themselves and others reading and soaking in the light and sea. Just being. It is a fine place to be. I wish this being, right now, could be forever. 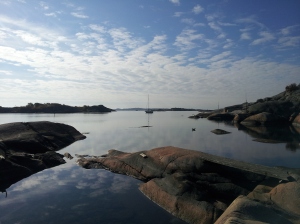 Obviously it couldn’t be forever, but I sat there for long enough to feel steeped in the sea air, then climbed down the rock and made my way to the tram. On my way I found a patch of forest, with groves of birches, young oaks and startled birds. It seemed almost absurd to find two of the places I enjoy the most, the sea and the forest, in the same place.
Then I went home. This was last week, and I can picture the scene where I sat as it is now. Windy, overcast, damp and quiet. I look forward to being there again. 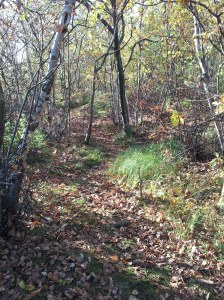