I feel as though every time I post something on Facebook or this blog it’s just the latest verse in a rhapsody about Summer. It’s so all encompassing here, from half the country taking the season off for the yearly holidays, lakes and the sea crowding with swimmers and the long, light nights. In comparison my memories of Australia make it seem like one long Summer, punctuated by a brief rainy period with the occasional minus degree night to blisteringly hot days at the other end, and with endless, cloudless blue skies in between. With nothing to really compare it to, I got bored of Summer and longed for a change, and a change is what I got. Having lived through an Autumn and a Winter here I feel like I’m experiencing Spring and Summer for the first time, and trying to make the most of it.

Ducks in a sunlit dam

Since we returned from our roadtrip, the holidays have continued for a little while. My partner returned to work and I returned to looking for work and trying to fill my days with usefulness. Before we properly returned to the old swing of things, we did something that I had been hankering for since Summer started; we went to a lake.

The lake in question was packed the day we visited, every patch of grass taken and the sandy shores covered in wobbling toddlers and sunbathing teens. There were even cement diving boards, the highest around 6 metres, and as full of people jumping and splashing as the rest of the lake we had seen. We continued around the shores, hoping to find a free area where we could spread out our picnic blanket and hopefully bbq without covering our neighbours in smoke. 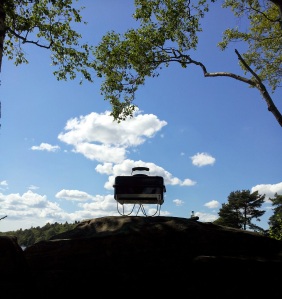 After walking some way we came to a non-grassy section, the lakes shore lapping on rocks rather than sand, and trees and bushes divided by small paths. Among them was a tiny clearing next to a large rock, the perfect height for a bbq, and just above a sheltered bay. We quickly grabbed it and settled in, spreading out the blanket and getting the bbq going. While my partner happy fiddled away with the bbq, I stripped down to my bathers and went to test the waters. They were cold and muddy, but on a hot Summer day, with a cold cider and a tasty meal on the way, it was perfect and I was soon making my way in, trying not to embarrass myself in front of any of the natives who seemed happy to jump straight in without even a gasp. 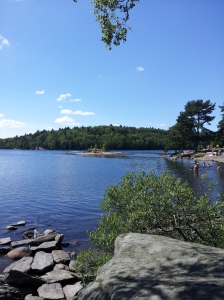 My partner soon joined me, as well as a few curious fish who flickered around our feet. Though the mud and reeds were a bit strange at first, it was nice to remember that inland Swedish lakes have a significantly lower risk of sharks, stonefish or jellyfish than WA beaches.

Food was soon cooking, spreading delicious smells around the area, and we ate and drank under the shade of the birch trees, treating ourselves to the raspberries we had picked the day before.

After food we decided to swim to a little island about 100 metres out, my speed assisted by the return of my fear of seaweed and unknown depths. On the island we joined a host of others basking in the sun, and at some point we fell into a doze, and were woken up by clouds drifting across the sun. Now that we were dry and warm, we slipped back into the lake and paddled back to our little bay and then decided that we needed icecreams.
I think there are few more pleasant ways to spend an afternoon than sitting on a rock in the sun, by a lake, eating icecream and listening to music with your favourite person. 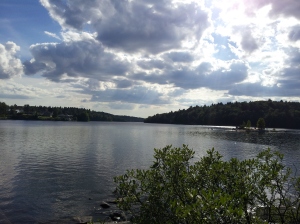 The clouds roll in

After a time we packed up and walked further around the lake, finding abandoned boats, more swimming places and berries, and then went back to the bus stop and home.

As mentioned earlier in this post, we had collected quite a few raspberries prior to the lake visit. The largest haul was from a stretch of bushes near a small lake. We had gone for a walk to explore our new neighbourhood and come across a trove by accident. Since then we’d grabbed handfuls here and there, some of them making it home though mostly not, though as quickly as they appeared the raspberries seem now to be disappearing. They are being replaced by blackberries, though we have yet to find a hoard as large as those of the raspberries, and even the occasional smultron (tiny wild strawberries). Soon there should be blueberries, though we have yet to see any sign of them.

Next year I hope that we can get out of town, go somewhere with untouched and dense berry bushes and just go crazy eating them. Some may even survive and end up as jam, who knows.

Time since then has blurred slightly into busy days and quiet days, as we prepare for work and study and shake off the lazy Summer days. I hope that even if the berries don’t last, these long, warm days will stay with us for a while yet, at least until I can get one more dip in a lake.