I’m letting the cat out of the bag this week. It’s a rather big cat and to be honest one I’d rather keep in the bag, but as with so much in life the bag-opening decision was taken out of our hands. Too many metaphors? In short, we’re moving back to Perth at the end of May.
There, I’ve said it.
Some of you may already know, in which case you’ll know the reason. Which is an illness in the family. We can’t stay over here while people we love suffer and fade day by day. Even though there are many things about this decision that make me sad, I know that it’s the right decision.

It will mean a huge change in our lives, and rather than imagine it as a return to the old life, I’m trying to frame it as the next adventure. We’ve changed and grown, and I’m not the person who jumped on a plane into the unknown almost 3 years ago. And once this next stage is over and we’re ready to consider our next adventure, I’ll be someone else again.

Perhaps we’ll even be able to return to Sweden, or live somewhere nearby that would allow us to visit regularly. That is an unknown at the moment, though one thing we are sure about is that we want to keep moving, regardless of whatever else happens in our lives. I’ll try and take Neil Gaiman’s words with me, and continue the journey with my eyes and my heart wide open. 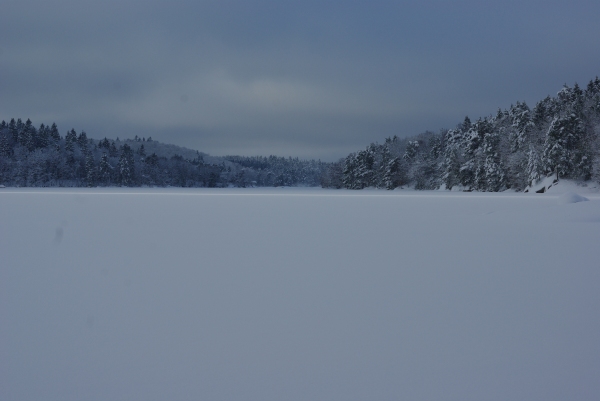 Even though there was a light dusting of snow last night (enough to fill a teacup), the sun is out today and the blue sky makes it feel as though the true winter is almost over. There will be clouds and rain and cold, for sure, but not the drifts of snow and frozen lakes that are a ‘real’ winter. Today then seems a good time to show you all a little bit of the winter that was just passed, the sort of winter that I love.

Snow had been falling off an on for weeks, bending down the trees under the soft, dense weight and freezing the lakes nearby. While snow is in itself beautiful, the moment it comes alive is when the sun comes out. One day we went for a walk on a weekend morning, and more than once I was quite literally stunned into stillness and silence by the beauty of the trees, light and snow. 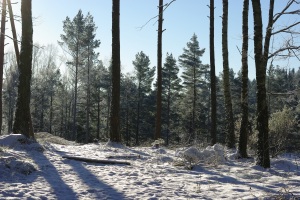 Snow in the forest

Branches sticking up through the snow were coated in a thin, shining layer like crystals, which drifted lightly off when flicked.

The forest, where not so many months ago we had picked berries, was muffled and still, though at any moment I expected a breeze to tumble a branch load of snow onto my head.

After my fella returned home, I continued on to the nearest lake, wondering if it might be frozen. It was was, very much so. 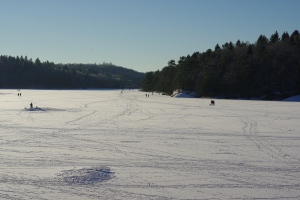 Not only was it frozen, which a layer of snow covering the thick (so I hoped) ice, but it had been transformed into a park, or to my romantic mind, a winter wonderland. Children scampered about in their fleuro one-piece outfits, adults walked their dogs and people of all ages skated and skied, leaving long, crisscrossing tracks behind them. Nervous at first, I walked over the tracks, listening for the creaking of ice and then walked more and more confidently across to the island that 2 years ago I had swum to. Under wide, bright blue sky and in the centre of the vast openness of the lake, the claustrophobia of winter fell away, down into the freezing, dark water under the ice. 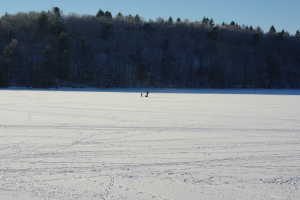 Walkers on the lake

On the shore nearest to the houses, areas of the ice had been cleared and with shoes or picnic baskets for goal posts, ice hockey games were underway. Often it seemed the dads were ahead, but now and then a son or daughter would sneak past and a parent dramatically fall over, equaling the score. In sheltered bays little children were being taught to skate, knees locked in fear and well padded bottoms covered in snow.

In the distance, old couples walked their dogs, disappearing into the further reaches of the lake.
If there was ever a heaven of ice and snow under a low hanging northern sun, this was it.

Then later that week a storm hit the west coast of Sweden, bringing wind and snow. A lot of snow. By the time it had ended, there was 30cms of it in our neighbourhood, and enough in town to stop trams, buses and cars. It was, in the words of frantic sensationalist newspapers, SNÖKAOS, which I think doesn’t need translation. This resulted in many people not getting in to work, including my fella, and one of my all time favourite news bloopers. My lesson for the day had been cancelled, so after a few productive hours of work we set off for the lake, my eagerness to show off the beauty and novelty of walking across it pushing me through drifts up to my knees that hadn’t yet seen a shovel. Though there was no sign of the sun through the thick clouds and the snow-wading was tiring us out, we reached the lake before too long. It was still frozen, also covered in deep snow, but as yet without any tracks or trails over its surface. Coaxing my fella out into the open, we made it to the island and sat to contemplate the wide openness, and quiet. Still beautiful, it seemed a more severe and solitary beauty than I had seen myself on the sunny day so recently. 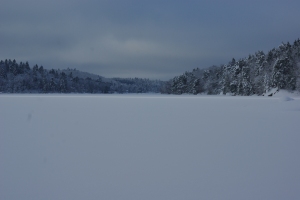 A brief moment of sun

Since then the temperature rose, rain fell, the snow melted into slush and then washed away, leaving only patches of black ice to tread carefully around. We might still get snow, but the day of minus temperatures and nights of -18 seem behind us now. The question isn’t how much snow do I need for a snow man, but when will the first flowers start to bloom?